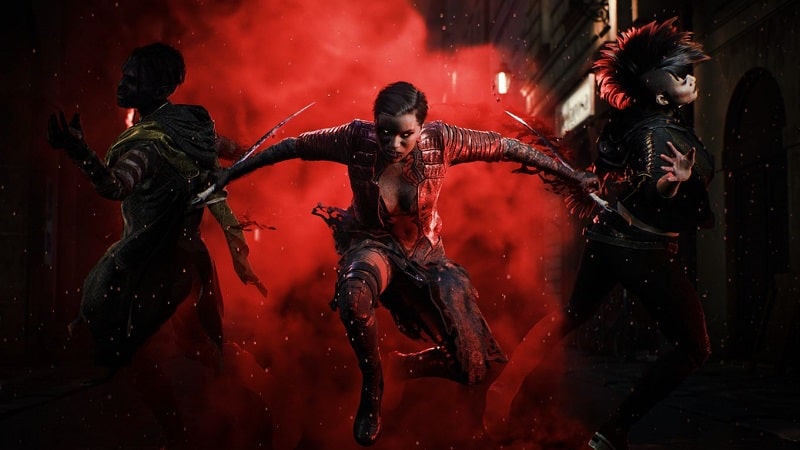 Vampire: The Masquerade – Bloodhunt PS5 review. Despite missing out on the battle royale ‘boom’ of the late 2010’s where seemingly just about everyone and their dog decided it would be a good idea to make one to accumulate those wobbly fat stacks, Swedish developer Sharkmob has nonetheless rocked up in 2022 with their own effort – and the results are both welcome and surprising.

Using the ever expanding World of Darkness gothic setting as its creative bedrock, Vampire: The Masquerade – Bloodhunt (to give it the sort of full lengthy title that these World of Darkness games seemingly cannot get enough of), taps into its established setting and lore to bring hugely satisfying traversal and an innovative PvE slant to the battle royale genre, resulting in a genre effort quite unlike any other so far.

Taking place in the eternal twilight of favourite vampire destination Prague, Bloodhunt is a free-to-play, third-person battle royale effort that at its base leans on the familiar staples of the genre. The goal, as you might expect, is to be the last vampire(s) standing in solo or team modes while the active map area shrinks thanks to an oppressive gas (it’s red here, obviously) that encroaches upon your domain and quickly murders anyone not quick enough to escape its deathly grasp. So far, so battle royale then – but this is where things start to get a little different and more than a little interesting. 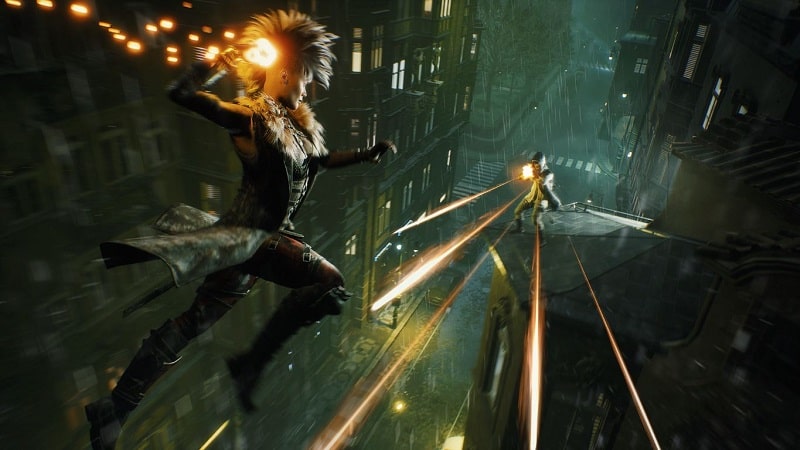 For a start, the City of a Hundred Spires proves to be quite the setting and not just because its full of rain, neon signage and twilight dappled streets. As per its nickname, Prague is generous stuffed full of gothic styled towering architecture (hence the appeal for the fanged folk) and this is significant not least because of how it feels precisely calibrated to take advantage of Bloodhunt’s excellent traversal system.

Fully embracing the notion that you’re a super strong creature of the night with superhuman agility to boot, Bloodhunt lets you leap insane distances and quite literally climb up the side of any building or surface you want. When used in tandem with an exaggerated sliding move that would make the Vanquish lads jealous, Bloodhunt’s hyperkinetic traversal feels rewarding, refreshing and satisfying – standing out in a genre where the most you usually get in this regard is a jump, a ladder climb and a parachute – if you’re lucky.

Of course the upshot of this movement system is that battles in Bloodhunt very often unfurl into spectacularly acrobatic affairs, as the opposing ranks of the undead wreak havoc across rooftops in epic and chaotic encounters that often spill down into the streets below with just a moment’s notice. Honestly, until you’ve leapt a hundred feet into the air from one building to the next before climbing up a massive cathedral tower, you’ll not want to go back to the usual cookie-cutter traversal methods that other battle royale games offer. 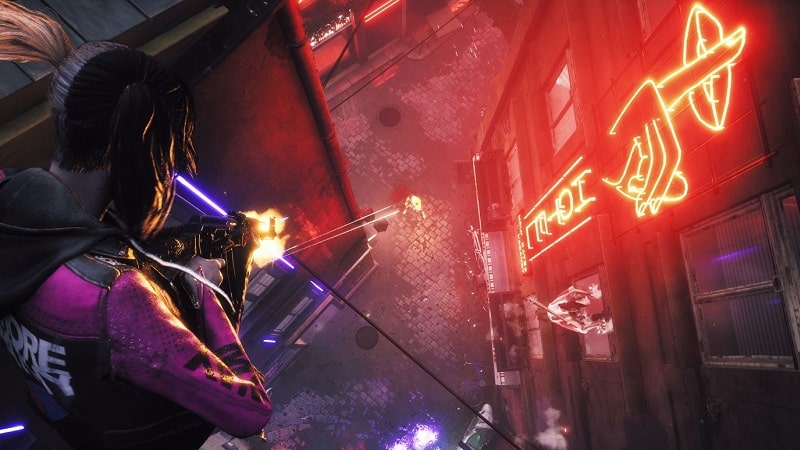 Being a vampire, especially one in the World of Darkness setting, brings with it its own set of unique boons and challenges that you wouldn’t necessarily experience in other battle royale titles either. For the uninitiated, the Vampire: The Masquerade setting is predicated around the Masquerade itself, a prevalent mask of sorts that exists between the vampires and the humans that sit beneath them on the food chain to maintain precarious balance of order. However, the Masquerade can be broken by acts of savagery such as feeding and killing humans, all of which can bring real trouble to players.

It’s here we see the real risk and reward DNA that is threaded throughout Bloodhunt’s gameplay and which also serves to underpin its more esoteric PvE trappings that other battle royale offerings lack. While the various humans that loiter and walk the streets of Prague can be drained of blood, brilliantly each human will offer up a different series of stackable buffs that make you stronger the more of that particular human type you feed from.

Whether it’s improving your special abilities (more on that in a jiff), providing you with increased health regeneration or even gifting you an extra life after you die for the first time, there’s genuine benefit to seeking out these fleshy ignoramuses and sinking your teeth in. Where the risk part comes in of course, is in how such behaviour affects the Masquerade itself. If you’re spotted feeding or killing a human, you’ll be Bloodhunted (they had to get that in there somewhere, I guess) and will appear on the radar of all of other vampires in the local vicinity, making your (un)life very difficult as a result. 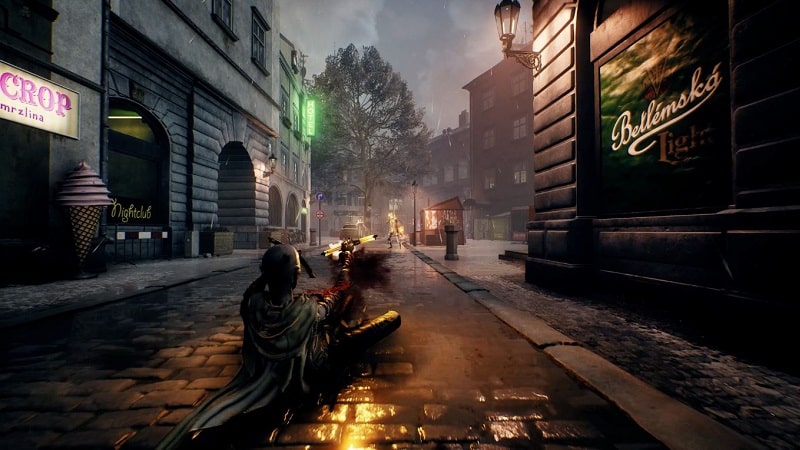 Speaking of having a difficult time of it, Bloodhunt’s PvE leanings also make themselves keenly felt where the loot side of things come into the equation as well. Like every other battle royale game since the dawn of man, Bloodhunt features a veritable armoury full of tied ranged weapons, melee weapons, trinkets and single use consumable items to keep things spicy. The kicker however, is that the higher end loot isn’t just guarded by good old-fashioned alarmed premises that sound their deafening klaxons if you attempt to breach the premises, but also by highly trained and well equipped vampire hunters that can kill even the most hardened vampire in just a few hits.

In genre where the only opposition is often just other players, it’s refreshing to see a developer like Sharkmob deftly engineer a range of more embedded threats like this, as it not only keeps the downtime between those player versus player encounters that much smaller but it also provides players with a whole heap of other stuff to do that doesn’t just revolve around murdering the opposite team and tea-bagging their prone forms.

Another benefit of the World of Darkness setting is that there are many, many different types of vampires than you would normally get in other comparable works of gothic fiction and lore. In Bloodhunt such variety manifests as the four different vampire clans that you can choose from – Brujah, Nosferatu, Toreador and Ventrue. Essentially representing the macro classes of Bloodhunt, each of these clans have different traits such as damage dealing, stealth, tanking and so on that endear themselves to particularly types of play. Where things get really interesting however are in the archetypes that exist for each race – providing a baseline of special abilities, perks and buffs that become progressively more potent the more enemies you kill and the more in-game objectives you complete. 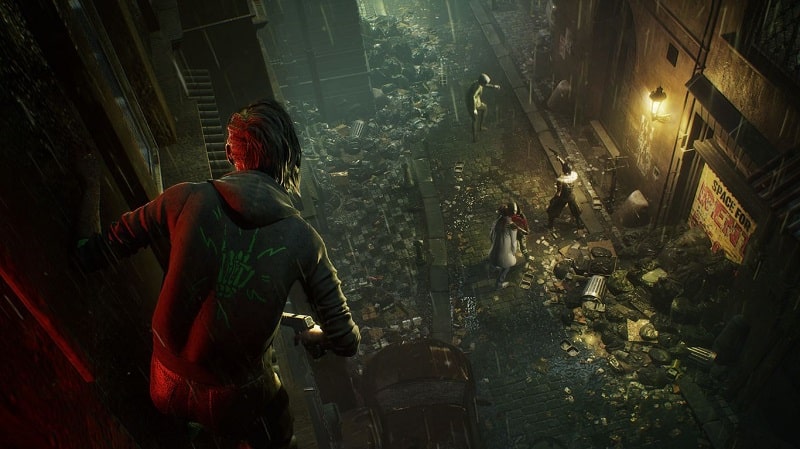 As tremendously fun as Bloodhunt is however, there are a couple of fairly sizable flaws that currently hold it back from greatness. The first is that crossplay with PC folks is grossly unfair right now thanks to the inherent control advantage that PC owners boast on account of their keyboard and mouse configurations, so if you’re seeking vampires to dance with from other platforms, be prepared to die a lot and very quickly in ways that seem desperately unfair.

Speaking of unfair, another issue that currently afflicts Bloodhunt right now is that melee combat feels more than a little bit overpowered and certainly, when used in tandem with certain other archetype abilities, it can make using firearms feel like an afterthought rather than, well, the first thought.

Elsewhere, unlike other examples of the battle royale genre such as Call of Duty: Warzone or Apex Legends, Bloodhunt doesn’t really have anything resembling a cinematic opener to its matches. Instead of falling from the sky in dramatic fashion, or even more applicably rising from some local crypt before emerging onto the streets, you merely just choose your starting point and then the game begins with you effectively teleported into that location. It’s surprisingly flair-free for a game that shows an abundance of it in some many other aspects of its design. 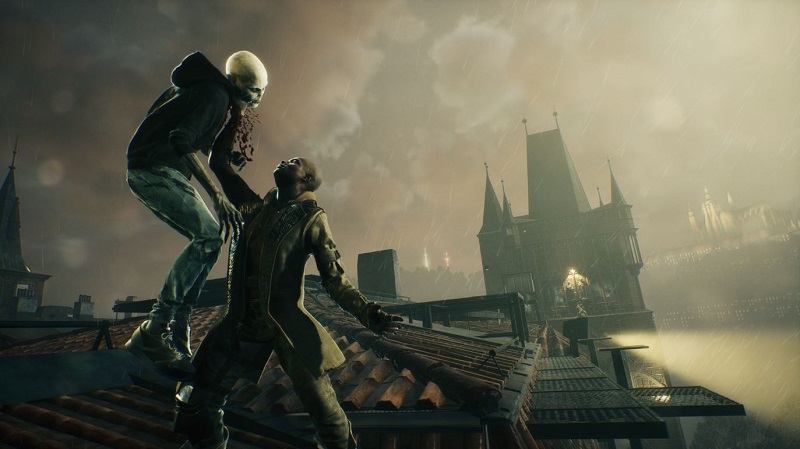 Finally, one other observation is that regarding Prague itself. Despite how evocative the design of the city is (and Bloodhunt’s Prague certainly stands tall as one of the more attractive battle royale maps out there, that’s for sure) it really isn’t that big – even with all that additional verticality thrown in. Additionally, Prague is the only map currently available in Bloodhunt too, so once you get used to its every nook and cranny, which doesn’t take as long as you think, the map can start to feel overfamiliar. Here’s hoping that Sharkmob taps into other global cities for Bloodhunt; personally, I’d love to see twilight versions of New York, London, Rome and many others.

As battle royale efforts go, Bloodhunt is surprising; which is more than other like-minded efforts can lay claim to. Though cross play remains unbalanced against more capable PC players and concerns over balancing and map variety remain, Vampire: The Masquerade Bloodhunt nonetheless brings a scintillating blend of furious traversal, inspired PvE design and neat lore from the World of Darkness setting to fashion one of the most refreshing battle royale efforts in quite some time.

Vampire: The Masquerade – Bloodhunt is out now on PS5 and is free to play.

As battle royale efforts go, Bloodhunt is surprising; which is more than other like-minded efforts can lay claim to. Though cross play remains unbalanced against more capable PC players and concerns over balancing and map variety remain, Vampire: The Masquerade Bloodhunt nonetheless brings a scintillating blend of furious traversal, inspired PvE design and neat lore from the World of Darkness setting to fashion one of the most refreshing battle royale efforts in quite some time.